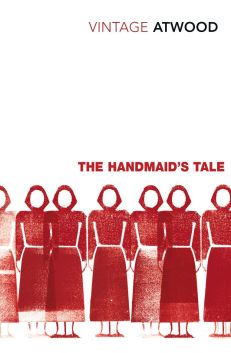 I read The Handmaid’s Tale for the first time a while ago, but picked it up again the other night when I couldn’t sleep and needed something to absorb myself in. Germaine Greer’s The Female Eunuch (my current reading project) just wasn’t going to do the job. In having read it again, I decided it was time to review. This is a book that seems to divide its readership; half think it’s incredible – eye-opening, gripping and thought-provoking, while the other half find it frustrating, poorly-written and totally unbelievable. I can see where both sides are coming from in their respective attitudes but, on balance, I do believe that those who didn’t enjoy it haven’t quite appreciated the subtlety of the novel.

The Handmaid’s Tale was published in the 1980s but you could easily be forgiven for thinking it’s a much more contemporary novel given the slightly eerily prophetic dystopian world that is its setting. The book is set in the Republic of Gilead, which we come to learn is the United States reformed, after an Islamic terrorist attack prompted a Christian sect to take control of the government and impose theocratic rule on the country. As part of their takeover, they stripped women of the right to work, read, own property and love, and have assigned them all a set role in society: usually either Handmaid, Wife, Daughter, Unwoman, Aunt or Martha. The story is told from the point of view of Offred (literally Of-Fred) a woman whose fertility has rendered her a Handmaid – responsible for procreation and assigned to high status men who are deemed worthy of breeding. We join her as she begins her third assignment as a Handmaid.

Through the narrative of Offred, we gradually learn more about the events that led to her current situation; she has previously been married with a daughter, whom she was separated from and sent to be trained in her new ‘profession’. Through flashbacks to her previous life and her training at the Red Centre we come to understand more about the rules and restrictions of the state and the ideology that it is based upon. Fundamentally, the Republic of Gilead is like a puritanical state, where women are supposed to be demure and modest, sexuality of any kind is frowned upon and men are the figures of power and agency. It is also a society that breeds on fear and suspicion, as citizens are encouraged to report on one another in order to isolate individuals and stamp out sedition. Finally, the main purpose of the state is procreation; all citizens, m
en & women alike follow rules that are all supposed to encourage, celebrate and facilitate the birth of legitimate children, as we are led to understand that the world is suffering from a global fertility crisis.

I think this book has an interesting take on the role of women. While their agency and individuality is removed from them, they are at the centre of the state, through their sex. Giving birth is hailed as the greatest achievement, and the few women who manage this are celebrated and praised. Whilst we could reflect that this reduces women’s importance to simply their biological capacity and nothing more, it does bestow recognition of the importance of bearing children that is sometimes lost in modern society. Reproduction of the human race does remain a vital demonstration of female power, although, thankfully it is no longer our only outlet. The women in this story are incredibly important, but they have little to no official power. All women are united in this restriction of their rights; even the most senior women, the Wives, are unable to do and act as they please, and it is certainly hard as a reader to work out what the most preferable female role is, if there is one. Whilst women are at the centre of this novel and the female characters are the most complex, interesting and developed, the roles they play suppress them in different ways.

I think Atwood is also keen to demonstrate that sexuality cannot be repressed, no matter how much society may attempt it. Offred’s lust for Nick is just that – lust. She does not find herself in love with him, she is just desperate for intimacy. Her venture into the underworld of society with the Commander also shows her that the male libido is equally incapable of being suppressed. I think Atwood wants to portray that often state or religion seek to suppress displays of sexuality, under the guise of morality or for the greater good, but in actual fact, all this is is an attempt to control and suppress. It is often regarded as ‘dangerous’ particularly in females; history is peppered with examples of sexually promiscuous females labelled as insane or degenerate. Her point in The Handmaid’s Tale is that this suppression of female sexuality has done nothing to improve the procreation statistics, and nor has the brainwashing managed to make people forget or forgo the intimacy that humans crave.

The main frustration with this book is that the concept is really interesting but there are lots of unanswered questions throughout. We are given lots of tantalising details, dropped in during the course of the novel, and we continue to read in order to understand exactly what happened to our narrator and the countless other women who shared her fate; what happened to the children and all the other men? How did people get assigned their roles in the new society? How did those in power take control? It is never explained what happened to Offred’s husband or her child, and it’s never clear what happens to sons – all we hear about are the daughters. Likewise, it’s unclear what the rest of the world is like; is Gilead a closed state in an otherwise ‘normal’ world, and what is the actual cause of this fertility crisis? This all comes to a head at the end of the novel where Offred’s fate is unknown. We are not told whether she has been extradited by friendly people or by the state police, and we will never know.

Although all of this is incredibly frustrating, I believe it’s entirely intentional. So much of the world that Atwood has created is in the darkness; it is characterised by the unknown, the hidden, and the secret. I think Atwood has drip fed us this information about the state to try and convey what it would be like to be Offred, or any of the women like her. I don’t think the gaps in the history are plot holes – they are there on purpose to give you as a reader the sense of the uncertainty, frustration and fear that pervades this world. Those people who like to have everything laid out and explained for them will therefore struggle a little with this book, but those who like to discuss, ponder, imagine and ask questions about the story they are presented with, will relish this novel.

I really liked The Handmaid’s Tale. I thought it was gripping, thought-provoking and original. Whilst I understand a lot of the criticism that it has received, it still remains a book that I would read again. I would just love to get a one-on-one with the author to know her vision of the world behind the story she’s created here.