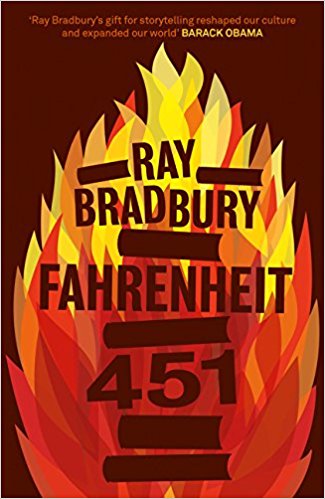 Another novel which I didn’t know about, this is one of about 500 short stories written by Bradbury, and certainly his most famous. A dystopian novel, this book explores a world where books are banned and firemen are no longer responsible for putting out fires, but for starting them in houses where books have been found. Farenheit 451 is, as the novel’s opening line tells us, “the temperature at which book paper catches fire and burns”, giving the book its title.

It has won several awards over the years and sparked much discussion on the topic of book burning and the role of books and the study of literature in an increasingly digital age. The novel tells the story of Guy Montag, a fireman, who becomes disillusioned with the destruction of books and property, and with the world around him which feels so drab and empty of purpose. He turns his back, rebels against the system and society and joins a group of outcasts to form a new life.

Farenheit 451 is interesting for a number of reasons. I found the dystopian world that Bradbury has created fascinating because it reaches the perfect balance of being close enough to our own world for it to be believable, but is equally far enough away to admire the imagination involved in creating it. This world would also probably have seemed even more imaginary in the 1950s, when the book was written, so it’s quite striking to consider how close Bradbury was with his vision. He has focused on the evolution of television and radio as becoming all encompassing, with people constantly connected through television ‘parlours’ (essentially rooms where all four walls are screens) and ‘seashells’ (radio devices that are wireless and in-ear). Considering the amount of talk there is these days about how we are always ‘plugged in’ or online, this was a pretty impressively prophetic concept from Bradbury. Obviously, the world has moved more in the ways of the internet and computers than necessarily television and radio but the overall concerns Bradbury highlights in this novel are much the same as we hear bandied around in the press today.

The natural academic discussion that the book raises about the importance of literature and books vs. television and radio is an interesting one, but I think I find the discussion itself more interesting than I found the passages about it in the book. They tended to be relatively abstract and quite difficult to follow. A couple of more poignant points that stand out are when Captain Beatty, Montag’s boss, tells him that there really is no need for firemen – people stopped reading on their own, they have no interest in books any longer, but the firemen are there just to uphold the order. This raises the point that it was not because people are forced not to be able to read that they don’t, rather that they started to stop reading themselves, preferring to pay more attention (ironically having a shorter attention span) to the television and radio media instead.

The book is pretty easy to read, written in a generally conversational tone and not hard to follow. The only times it gets slightly sticky is when there’s more of the philosophical discussion around books, their role in society and what we can or can’t learn from them. This is heightened with Captain Beatty, particularly, when he quotes endless passages from literature in an effort to destabilise Montag on his return to work.

I think I found the context of Montag’s breakdown a little sudden and not entirely properly explained – it felt like it could have done with slightly more attention, especially given how erratically and passionately he falls into his rejection of his previous life. However, on the whole, the characters are well developed and relatable.

Overall, the book was more interesting than enjoyable for me. It didn’t take long to read, and it did provoke thought and appreciation in me for books, particularly as I reflect upon their role in the digital age, where the audiobook, Kindle & e-book grow ever more popular. There is still something special about a turning the pages of a properly bound book, especially one that is old and comes with a history of readers, even if it becomes less convenient to read this way in our fast-paced society. The passages of this book that underline the legacy of words and stories and the importance of books themselves as the vessel for these did give me renewed energy for reading. I made a silent promise to myself to try to prioritise time to read every day (instead of automatically turning to Netflix for entertainment).

As a story, it wasn’t necessarily the most gripping read for me; I think I would have struggled had it been longer.

Happy World Book Day! 🌍📚 ⠀⠀⠀⠀⠀⠀⠀⠀⠀ Celebrating with this wonderful quote from Margaret Fuller, American journalist, editor and women’s rights activist. She was also first female full-time American book reviewer in journalism, which seems appropriate on the eve of international women’s day 2019. Happy reading! 📖 ⠀⠀⠀⠀⠀⠀⠀⠀⠀ ⠀⠀⠀⠀⠀⠀⠀⠀⠀ #bookstagram #books #worldbookday #reading #bookquote #read #bookblog #margaretfuller #quotes
New year, new reading challenge! 🏆📚🎉 ⠀⠀⠀⠀⠀⠀⠀⠀⠀ Whilst I have my never-ending list of classics to get through 😣, I wanted to do a challenge this year that wasn’t just around numbers but would encourage some wider reading. So, I’m adding some extra goals to my #goodreadschallenge of 45 books! Excited about seeing what comes up ☺️💃🏼 ⠀⠀⠀⠀⠀⠀⠀⠀⠀ Let me know your reading goals below ⬇️🙃 ⠀⠀⠀⠀⠀⠀⠀⠀⠀ #reading #readingchallenge #goodreads #books #bookstagram #bookgoals #read #2019
4️⃣0️⃣ books read this year! 🥳 No re-reads in this and a bunch of real crackers to recommend. My top book of 2018 has to be Gone With the Wind 🌬 - read my review over on theblurbgirl.com now. ⠀⠀⠀⠀⠀⠀⠀⠀⠀ Excited to see what books 2019 has in store. Did you hit your reading challenge? What was your favourite book this year? 🎉📚 ⠀⠀⠀⠀⠀⠀⠀⠀⠀ #readingchallenge #2018books #bookstagram #books #reading #2018 #goodreads #goodreadschallenge
**NEW REVIEW** 📚 My thoughts on Les Misérables by Victor Hugo now up on www.theblurbgirl.com A tale of love, loss, hope and despair, including some handy hints to make reading it a bit easier. Check it out now and comment your thoughts! 🖤 • • • #bookreview #books #bookstagram #quotes #lesmis #lesmiserables #victorhugo #booklist #reading #readinglist
👩🏻‍💼👨🏾‍💼C A N D I D A T E 👨🏾‍💼👩🏻‍💼 More Latin for today’s word of the day 🤓 Candidate comes from the Latin ‘candidatus’ meaning ‘white’ or ‘shining’ ✨🕊 The word came to its new meaning because those running for office in Ancient Rome were distinguishable by their specially whitened togas during elections👨🏻‍⚖️ ⠀⠀⠀⠀⠀⠀⠀⠀⠀ You could say that this denotes the shining clarity with which candidates express their manifestos or the purity of spirit with which they undertake their office 🤔🤨 ⠀⠀⠀⠀⠀⠀⠀⠀⠀ Not sure that association has endured 😂 ⠀⠀⠀⠀⠀⠀⠀⠀ #wordporn #wordsofwisdom #wordoftheday #candidate #latin #words #instalearn #learn #english #etymology #whatwordsmean
Huge news. After a long 4 months Les Misérables is complete! This book has been both a bane and a joy for me - lots to say in this review but certainly relieved to have finished! Blog post coming soon (and rewarding myself with the soundtrack on full blast in celebration 🎶)📚📝🎉 ⠀⠀⠀⠀⠀⠀⠀⠀⠀⠀⠀⠀⠀⠀⠀⠀⠀⠀ #lesmis #lesmiserables #book #reading #read #victorhugo #literature #novel #classic #classicliterature #booklist #complete #bookstagram