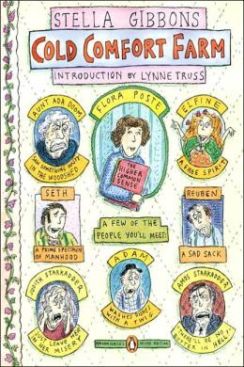 You know, I don’t really know why Cold Comfort Farm makes it onto so many must-read lists. Having read it, and talked to a few people about it, I think it polarises opinion. Now, I confess, I actually think this is often a good sign in a novel but when I was reading it I just couldn’t understand why it was deemed by so many to be such a fantastic piece of literature.

I mean, the book is meant to be funny. Many people find it really funny and by that I mean laugh-out-loud hilarity and giggles on every page. For me, the pinnacles of amusement were more along the lines of a faint, wry smile at how utterly bonkers this book was turning out to be. However, even if you acquiesce that this is indeed a successful comedy, I still think that the plot and the characters leave a lot to be desired considering the hallowed reputation that comes before it. So, I had to do a little digging to discover just why this book has had such phenomenal popularity over the years.

It turns out that Cold Comfort Farm needs to be appreciated within the context of a specific type of literature. It was published in 1932 and is a parody of the romanticised, pastoral melodrama genre of fiction which was popular at the time. The inter-war period spawned a plethora of novels that set tragedy amid rural communities. I guess they were probably the equivalent of ‘The Archers’ in book form. As a spoof of this type of literature (particularly that of Mary Webb, Sheila Kay-Smith and, to a certain extent, D.H. Lawrence), I think Cold Comfort Farm probably deserves further appreciation than I gave it credit for. However, not having read much of the genre that inspired it, I can’t personally comment on its success as a pastiche.

What probably annoyed me most about the book were the characters. I couldn’t really get on with Flora very well – she just seemed too prissy, too perfect and too capable of problem solving. The Starkadders sort of baffled me as a whole – they are supposed to be caricatures but I didn’t find any of them really likeable, so I wasn’t very invested in what happened to them. I also felt so let down that we never discovered just WHAT Aunt Ada Doom saw in the woodshed. I honestly felt like the whole book was leading up to that point; it seemed that it was her raison d’être and it was such a crushing blow to finish it and still not know! Although the rest of the ending ties up loose ends nicely, it’s incredibly  far fetched and I just couldn’t suspend my belief enough to accept it for what it was. I couldn’t really follow how exactly all these ends had come together – it was all a bit deus ex machina and I was left feeling flat.

Also, there was a lot of endless description of the farm and the weather particularly towards the start of the book that I found boring and unnecessary. I’ve since discovered that this is all part of ripping off Hardy and Lawrence, which makes a lot more sense, but at the time it just felt like it was slowing up the narrative. Once we’d sort of dispensed with the ‘scene-setting’ and we got into the action of the novel, things did improve. I suppose I just wasn’t expecting that type of passage in a book that sells itself as a comedy.

So, in this review, it is possible that I am being a tad unfair to Stella Gibbons and that much of her literary genius has just gone over my head. However, if your book relies on literary context for it to be enjoyed in full, then I think it puts its status as a timeless classic at risk. Reflecting on it later, I have a suspicion that if I read this book again I would enjoy it a lot more than I did the first time so I’m keeping it on the re-read shelf and hoping for second time lucky!

Happy World Book Day! 🌍📚 ⠀⠀⠀⠀⠀⠀⠀⠀⠀ Celebrating with this wonderful quote from Margaret Fuller, American journalist, editor and women’s rights activist. She was also first female full-time American book reviewer in journalism, which seems appropriate on the eve of international women’s day 2019. Happy reading! 📖 ⠀⠀⠀⠀⠀⠀⠀⠀⠀ ⠀⠀⠀⠀⠀⠀⠀⠀⠀ #bookstagram #books #worldbookday #reading #bookquote #read #bookblog #margaretfuller #quotes
New year, new reading challenge! 🏆📚🎉 ⠀⠀⠀⠀⠀⠀⠀⠀⠀ Whilst I have my never-ending list of classics to get through 😣, I wanted to do a challenge this year that wasn’t just around numbers but would encourage some wider reading. So, I’m adding some extra goals to my #goodreadschallenge of 45 books! Excited about seeing what comes up ☺️💃🏼 ⠀⠀⠀⠀⠀⠀⠀⠀⠀ Let me know your reading goals below ⬇️🙃 ⠀⠀⠀⠀⠀⠀⠀⠀⠀ #reading #readingchallenge #goodreads #books #bookstagram #bookgoals #read #2019
4️⃣0️⃣ books read this year! 🥳 No re-reads in this and a bunch of real crackers to recommend. My top book of 2018 has to be Gone With the Wind 🌬 - read my review over on theblurbgirl.com now. ⠀⠀⠀⠀⠀⠀⠀⠀⠀ Excited to see what books 2019 has in store. Did you hit your reading challenge? What was your favourite book this year? 🎉📚 ⠀⠀⠀⠀⠀⠀⠀⠀⠀ #readingchallenge #2018books #bookstagram #books #reading #2018 #goodreads #goodreadschallenge
**NEW REVIEW** 📚 My thoughts on Les Misérables by Victor Hugo now up on www.theblurbgirl.com A tale of love, loss, hope and despair, including some handy hints to make reading it a bit easier. Check it out now and comment your thoughts! 🖤 • • • #bookreview #books #bookstagram #quotes #lesmis #lesmiserables #victorhugo #booklist #reading #readinglist
👩🏻‍💼👨🏾‍💼C A N D I D A T E 👨🏾‍💼👩🏻‍💼 More Latin for today’s word of the day 🤓 Candidate comes from the Latin ‘candidatus’ meaning ‘white’ or ‘shining’ ✨🕊 The word came to its new meaning because those running for office in Ancient Rome were distinguishable by their specially whitened togas during elections👨🏻‍⚖️ ⠀⠀⠀⠀⠀⠀⠀⠀⠀ You could say that this denotes the shining clarity with which candidates express their manifestos or the purity of spirit with which they undertake their office 🤔🤨 ⠀⠀⠀⠀⠀⠀⠀⠀⠀ Not sure that association has endured 😂 ⠀⠀⠀⠀⠀⠀⠀⠀ #wordporn #wordsofwisdom #wordoftheday #candidate #latin #words #instalearn #learn #english #etymology #whatwordsmean
Huge news. After a long 4 months Les Misérables is complete! This book has been both a bane and a joy for me - lots to say in this review but certainly relieved to have finished! Blog post coming soon (and rewarding myself with the soundtrack on full blast in celebration 🎶)📚📝🎉 ⠀⠀⠀⠀⠀⠀⠀⠀⠀⠀⠀⠀⠀⠀⠀⠀⠀⠀ #lesmis #lesmiserables #book #reading #read #victorhugo #literature #novel #classic #classicliterature #booklist #complete #bookstagram